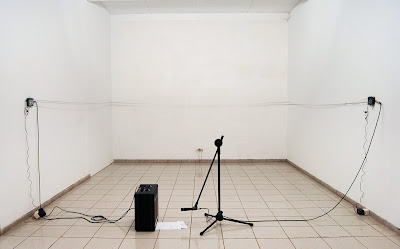 Duto Hardono is a young artist from Bandung who utilizes sound as a medium to explore ideas about the human condition. Using collage and looping techniques as metaphors he investigates human issues such as time and temporal spatiality.

He finished his masters at the Bandung Institute of Technology (ITB) and has exhibited his work in Indonesia and abroad.

The Jakarta Globe caught up with Duto to find out more about the connection between sound and memory, how sound can be cut and pasted like photographs.

In your live performances you use collage techniques to play with sound. Is there a method to the selection of sounds, or is it more often random or improvised choices?

I use collage, especially in my visual arts practice, as a method to recreate what is representational into something more abstract.

These tape loops are well prepared, studied and calculated, acting much like instruments — just like how you compose a musical score. But for the live performances it can often be more organic, but still improvising with these pre-prepared tape loops. It’s like creating layers from fragments of sound memories.

The looping of information seems to be a recurring theme in your music and also your visual arts work, such as ‘28 Days From Red to White,’ where you sent postcards to Japan every day for a month, or ‘How to Perform John Cage’s 4’33 on a Tape Loop Delay as Demonstrated by a Band of Cacti’ that was presented at the Shanghai Biennale. Why do you rely on looping so much?

In 2012 when I was doing my master’s degree at ITB, my main focus was on studying sound looping.

The idea of the loop to me is like a metaphor about our existence at this unique moment in time in the whole human narrative, where ideas from the past coalesce with the present and simultaneously bring forth a new and magnificent fractal reality.

It’s like a pattern in our daily lives where things are not linear but more like a great cycle closing in on itself.

In my ‘loop study’ solo show ‘Good Love, Bad Joke,’ which I presented at Selasar Sunaryo Gallery in Bandung, I exhibited three main loop pieces. They were ‘Loop Study No 1: Uber-Feedback,’ which was an installation resembling a recycling pattern about the concept of the accumulation of ideas using amplification and feedback; ‘Loop Study No 2: Memory Lane,’ which showed the degradation of ideas by using 16-millimeter film loops that self-destroyed over time as they played through the projector; and ‘Loop Study No 3: The Scream,’ which was a static loop using video that looped into itself continuously. Since then, these concepts have tended to recur in my other works.

You use a lot of analog sound equipment in your work like cassette tapes, vinyl records and quarter-inch tapes. Why use technology that will in time become obsolete in the digital era?

My work often talks about time and its relationship to humans and vice versa. Technological objects such as tapes and vinyl records are basically artifacts of the human narrative. Using them is a reference to an era and to a historical achievement of an idea. They are also objects of human nostalgia for a time past. These artifacts may well become obsolete but the ideas of a time are still present.

Tape technology itself is very fascinating — it’s not a perfect medium free of error, rather it is limited and very human. The cassette tape has two sides, in some ways just like humans.

How do your live sound performances differ from your sound installations?

But the actual performance is pretty different, I would say it is less restricted. It is the improvisation of the installation.

The performance itself is often unpredictable, which I like. It’s good to make mistakes — it invites things that will damage the original intent to expose a hidden intention. I think artists need to go beyond the canvas.

Your method of working could be seen as Western-centric. What would your response be to that?

[Laughs] You could blame ITB, maybe.

However, I see this as an aftermath of my personal background and my own references that take into account personal taste. It started long before I studied fine arts at ITB.

The references and experiences keep developing over time, a lot like the idea of the loop that I mentioned before: Everything is closing in but also connected.

For me, I think it matters if you are labeled Western/Eastern/Southern/Northern, as long as you don’t end up in a void. It’s nothing to be ashamed of and it’s my choice in the end.
Posted by Art of No Century at 10:05 PM