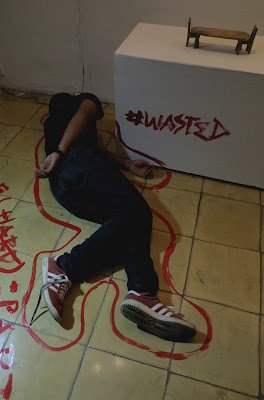 Cemeti Art House is celebrating its 25-year anniversary this year, having opened its’ doors in 1988 it has hosted everyone from fledgling young Indonesian art students, local and international curators to big art stars. In the past quarter century this modest unassuming gallery space has provided a solid arts infrastructure to an arts community that has long suffered from a lack of government support and a shoddy arts education system. However it must also be acknowledged that because of this lack of support, it has to some extent assisted in the development of an interesting and resourceful art scene. If the system in Indonesia had actually provided a government art funded museum structure or decent art schools, it would have been highly unlikely that Cemeti Art House would have achieved creatively what it did, in terms of its freedom to experiment, to engage educationally a young generation of artists and to be independent from Indonesian government interference. The unique position that Cemeti Art House held in the early years as a anti-establishment gallery run by artists, Mella Jaarsma and Nindityo Adipurnomo, was also that they were able to fulfil a vision of what they themselves imagined contemporary Indonesia art could be, through the development of not only interesting visual arts programming but also educational residencies with an emphasis on the importance of visual art archiving (Indonesia Visual Arts Archive). Cemeti Art House through its 25 years of dedication and resilience has become one of the major backbones of the contemporary arts community in Indonesia today with many artists owing a debt to what they as an institution have provided.

One of the events of the 25-year celebratory program was One Night Stand both an exclusive insider art party and an improvised art show. Artists, by invitation only, were asked to present durational work, which would be presented for no longer than 1-2 hours. After which the work would then be taken down and replaced by new artwork by a different group of artists. Which meant that over a course of 8 hours, 4pm until 12 midnight, more than five different kinds of shows happened within the space. The event aside from two-dimensional work also included music performances, theatre art pieces, a puppet show and time-based sculptures. As with any artistic practice the community of artists, curators and collectors around the work also exerts a major influence on the way the art is created and to a larger extent on how it is perceived, without the strength of the community support in Indonesia, the artwork would most likely be not as interesting creatively nor successful in creating what many people from outside of Indonesia see as a ‘happening’ art hub. Over the 8 hours, intentional or not, the focus of the artistic experience of One Night Stand slowly shifted to the ‘theatre’ of that community, with the artwork on the walls serving as a theatrical backdrop and a point of access for this main event.

The One Night Stand invitation itself was also fairly vague causing some amount of confusion, with many of the guests contributing to the spectacle, by arriving in costumes—one guest in a leopard print zip up pyjama jumpsuit with bell boy style hat and another coming in a complete batman outfit with matching batman motorcycle and as the night progressed, the audience participation increased. One young artist lying in a corner of the gallery, unintentionally unconscious, became a living artwork, after a can of red paint and a paintbrush was brought out from the storeroom by several artists. The result of this piece was an interesting human installation with a neat red outline drawn along his silhouette, almost reminiscent of New York photographer Weegees’ grotesque images of murder. He was also moved around the gallery several times by different groups of people and placed in different yet interesting positions.

An art ‘happening’ in its’ Allan Kaprow 1960’s purist definition, the act of the separation blurring between the artworks, curators, artists and viewers became evident—with all sides organically, consciously or not, contributing to the overall experience of the spectacle. Whether that was the intention and projected outcome by the organisers of this event to illicit some kind of spontaneous response, was as unclear as the event invitation itself.

Edited version in the JAKARTA GLOBE
Sunday 17 February 2013
Posted by Art of No Century at 3:59 AM