A Review of Ardi Gunawans’ first Indonesia solo exhibition: A Proposal For a Permanent Fixture at Ark Gallerie in Two Editions: Superlight 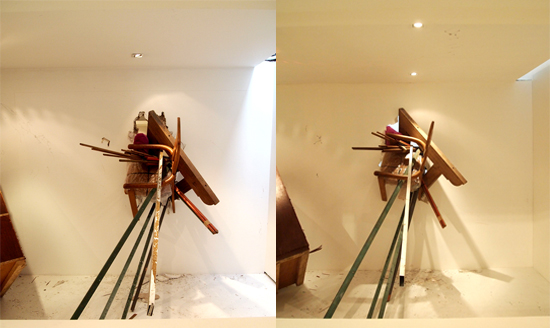 In Ardi Gunawans’ first Indonesian solo show at Ark Gallerie in Jakarta we are presented with several unique but well traversed visual questions and deceptions concerning reality, authenticity and the economy of visual art.

On first viewing this new work is difficult to conceptually decode because it looks like a botched house renovation. On closer investigation we can see that there are two rooms that reflect one another in what looks like an attempt to mirror exactly what consists in each space, the intention was to construct twin installations. One in the existing gallery space and again in what was once the Ark Gallery storeroom. This storeroom space was knocked down and re-built to create a mirror image of the other ‘original’ interior.

What we are presented with are two spaces that both have a medium sized hole haphazardly cut into a wall large enough to accommodate a variety of objects such as a purple soft toy, wood doweling, an old painting frame and some left over plastic pieces. These objects have been arranged to look like they had been recklessly rammed into place, to the right is another construction of more soft toys, tables and a bookshelf arranged in an also precarious manner that assumes a danger of disintegration if even one object was to be pulled out. There is then another pentagonal shape cut into the wall that offers a considered and strategic view into the next room, which has almost exactly the same configuration.

The shape and method used to the cut the holes can be seen largely as homage to American sculpture Gordon Matta-Clark, which Gunawan admits has been an influence on his practice. Gordon Matt-Clark was interested in the idea of orphaned spaces, abandoned buildings and used urban materials as his main art form. Gunawans’ seemingly haphazard approach to cutting holes in the gallery walls and his heavy use of what looks like remnants of a demolished house can be evidence of Matta-Clarkes' influence and like Matta-Clarke, the work is commercially unviable. This installation is a work that clearly cannot be sold as easily as a painting or traditional sculpture unless to a collector that is quite willing to take risks. In an arts landscape dominated by commercial art sales, a large portion of artwork is often within these material parameters. ‘A Proposal For a Permanent Fixture at Ark Gallerie in Two Editions: Superlight’ is a critique of this commerciality by simply being a work that is difficult to commodify and moreover made entirely from junk materials, the collector is inevitably left with only concepts and ideas. Whilst this is hardly a new practice, particularly in Western art history, it makes an important statement in South East Asian, a region that is being touted as the next international arts centre.

Another main concept of this new work are ideas surrounding the hyper-real, which some could argue have become an intrinsic past of contemporary daily life, from the simulated malls of Dubai to the faux 1930’s housing estates such as the Disney owned ‘Celebration’, we are now often challenged with the idea of what constitutes originality. If the notion of originally indeed exists it was questioned at the opening of Gunawans’ show when he used identical twin girls as the hosts—identical twins being nature’s ultimate statement on the original and the fake. The presence of these twins also acted as a biological embodiment of what conceptually was occurring in the artwork. Twins are born with the same DNA but through social conditioning and separate individual experience often grow to look different from one another. ‘A Proposal For a Permanent Fixture at Ark Gallerie in Two Editions: Superlight’ there was clearly an original artwork from which the artist used as a blueprint but during the process of re-construction and the inadequacies of memory this second space became another work altogether and the people who came to view this show will never know which was the original and which was the fake.
Posted by Art of No Century at 5:36 PM