This new work by Jim Allen Abel is a critical analysis of the current power systems inherent in Indonesian contemporary society using the medium of photography and performance art.

Power and systems of power were and still are an important institutionalised part of life in Indonesia. Since the fall of Suharto many aspects of society have opened up avenues for critical analysis in the media and to some extent pulled apart existing bureaucracies however many systems are still inherent in much of Indonesian life today. 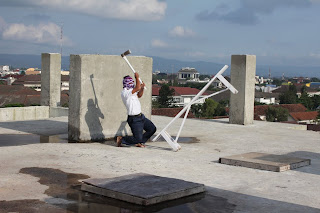 Jim Allen Abel new series System Reject is a sequel to his previous work Uniform Series. This new body of work is an attempt to destroy these institutionalised structures, employing the methods of performance art—he presents a series of photos to express an action in an attempt to negate these systems.

Documentation of time has been and is photography’s main conceptual reason for existing. Using the medium as a way to prove or capture that a moment, place or person existed, has been expressed in multiple ways by many different artists including performance artists. Performance artists have used this medium as an archival extension of their work and then later as the work itself.

There are many examples of this—one pivotal image was Yves Klein’s 1960 piece Le Saut dans le Vide of him jumping off a wall onto some unknown street which also symbolised the void. A tension is present whether the image is real or montaged—whoever views this photo-still has an uneasy feeling that an accident is about to happen. 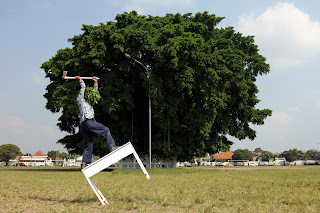 These ‘photo actions’ by Jim Allen Abel presents a series of visual critiques of authoritarian power structures using the symbols of the axe and the object. Awkwardness is one of the key focuses, using tension as the avenue to strip the objects of their symbolised power—a table, the place where most decisions are made or a bench where school children sit. The provocateur in each image is wearing a uniform from various organizations and institutions such as a police uniform, an office worker, a parking attendant and the military.

Uniforms are often very effective ways to erase the individual and employing the image of the uniform in these photos is a rebellion against the system by the people who work within that system—the faces are also covered by something trivial and silly in a further attempt to ridicule what power maybe left.

Each image presented here is a moment in time that is at its most awkward and tense just before the axe drops and the moment just before the uniform person falls and has an accident with possible injury—there is an unease and a lame uncomfortableness that comes from the intense effort made by the masked uniformed person. Symbolising the danger that these power systems create when one is acting to destroy it—there is always a threat and risk to personal safety in the attempt. 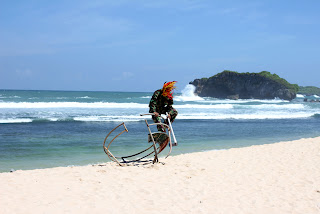 These images are all metaphors for political struggle and anarchistic rebellion which is a way to deal with personal history and experience of living in a society which still has a hangover from a time when authority and military dictatorships were the norm.