The Profound Art of Being a 'Loser'

‘I have a one track mind—that’s all I am interested in, is Love’
—John Cassavetes 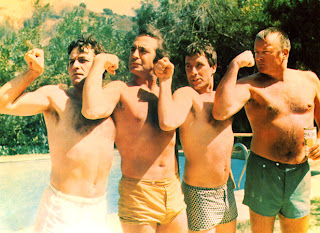 John Cassavetes directed a film called ‘Husbands’, which is the film I would like to write about seeing as the great acting triumvirate has now passed away with the death of Ben Gazzara the last actor to have survived, died from cancer last month.

‘Husbands’ was directed at a time when the feminist movement was in full swing a brave man to have pitched a movie purely about the male ego in pursuit of its own issues into this feminist revolution—he was not wrong to have made this film at that particular point for a feminist movement that rarely discussed men's role in their debate. ‘Husbands’ posits just that question. What was men's role in relationships?

This film deeply investigates this problem of male and female separation. ‘Husbands’ almost goes so far as to say long term relationships are an unhappy and difficult experience especially in the hypocrital and devoid backdrop of suburbia which John Cassavetes often sets his films. It is in essence a film about the male search for the meaning of life and the definition of love, triggered by the death of their also middle aged male friend.

Archie (Peter Falk), Gus (John Cassavetes) and Harry (Ben Gazzara) are all married men, the opening sequence of the film shows these married men in many 70’s yellow colored snap shot images of family gatherings by the pool, lazy Sunday barbeques, group portraits of them with their wives, drinking beer and looking pleased with themselves. The opening sequence sets up the pre-amble to the truth of this film it goes on to then show us what that truth is which is relationships are not simple or easy—love is not simple or easy, it is awkward full of lovely moments and equally awful times.

From this happy opening sequence then to the scene at the cemetery and the burial of the fourth man that made up their happy four man group. Archie, Gus and Harry are stunned and have come to the realization that they are on their own path to death being men who are in the descent of their lives.


So starts the 4-day drinking bender beginning in NY City ending up in London. This regression back into teenage hood (but with bank accounts) see’s them tooling around NY city playing basketball, swimming, drinking beer with strangers and pushing every situation to the limits of awkwardness in order to find some meaning. Not wanting the experience of this stream of escapisms to end, they all decide to take a trip to London to live out the rest of the bender in style at a classy hotel and manage to pick up several good-looking girls from the casino.

It would be very easy to just on first viewing to consider this film a boy’s own adventure which only illustrate the irresponsibility of men but Cassavetes was after something deeper. This film is about discussing feelings of failure in men and honest look at how to deal with these feelings. It asks the ultimate question which has plagued film since its inception: what is love? how does one make it work?

Like most of Cassvetes films he is not afraid to look at these often embarrassing moments that every human experiences—male or female. He has often admitted that he has intentionally wanted to place many of his actors outside of their comfort zones in situations where they are most likely to expose something awkward but honest—stripping people of the false image that may have about themselves and the world.
‘These guys don’t just want to get by in life. They want to live. I don’t really know what ‘Husbands’ is about at this point. You could say it’s about three married guys who want something for themselves. They don’t know what they want, but they get scared when their best friend dies. Or you could say it is about three men that are in search of love and don’t know how to attain it. Every scene in the picture will be our opinions about sentiment. I try to talk to the actors and try to find out what I really think about sentiment. It may turn harsh or bitter; but I can allow anything as long as I know we are honest’

‘Husbands’ is exactly about doing just that but from the male perspective, it doesn’t hide any of men’s ugly faults and within that honest portrayal we get some real understanding of why relationships have moments of failure or success, it allows a proper discussion to exist about male-female relationships and exposes the damage that men can do, much in the same way that his other film ‘A Women under the Influence’ did from the female perspective.

The most telling of this truth is in the end scenes when Archie (Peter Falk) and Gus (John Cassavetes) on the return trip home (Harry played by Ben Gazzara, not wanting the illusion to end, stays on in London) at the airport feels reality descending and in a guilty frenzy starts buying toys for their children, as a remedy to what they know is in store for them when they get home. These toys are the superficial band-aid to the dysfunction.

The end scene is the most heartbreaking visual representation of what can be the resulting damage, as Gus clutches 2 large paper bags filled with these 'guilt' toys—he see’s his young daughter and then comes the moment, this reality of the life he has with his children and his wife comes down hard on him—looking lost and abandoned his small child comes stumbling down the driveway and on seeing her absent father spontaneously bursts into tears, this fragile realization is then soften by his son who yells ‘Dad! Oh booooy! You’re in trouble! Maaaa Dad’s home...’ and thus this life goes on.